Schloss Gottesaue is a small, often destroyed and reconstructed Renaissance palace in "Ostauepark" of Karlsruhe's Oststadt district. The Karlsruhe University of Music has been located here since November 1989. 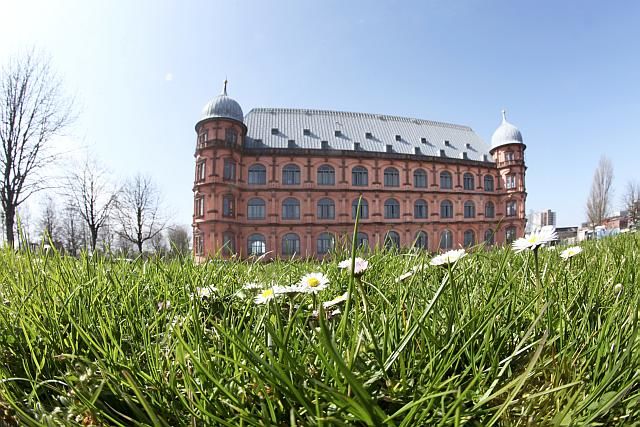 Gottesaue palace is based on a design by Johannes Schoch (1550-1631), Strasbourg council's chief architect at that time, and was originally intended to serve as a summer house. Since its completion, it has had an extremely eventful history. After being destroyed a number of times in the 1689 Palatinate war of succession, it was gutted by fire in 1735. As the margraves of Baden-Durlach had no interest in this palace after the founding of Karlsruhe, it was rebuilt in a reduced form with a two-storey structural shell and three-storey towers and, in the following two years, initially served as a fruit store for the margraves' demesne, then as barracks from 1818, and was later taken over by the police before it was destroyed in an air raid in May 1944.

The ruins of the palace were a reminder of the horrors of the war for almost four decades before work on reconstructing it for the purposes of the Karlsruhe University of Music began in 1982. In doing so, the external structure was rebuilt in such a way as to bear witness to the changes the building has been through in its history. A modern building was created inside to serve as a modern university for music, though it features allusions, interpreted in a modern style, to the Renaissance architecture. After the building was completed in 1989, a number of the surviving outbuildings, such as the "Fuchsbau" and the stables, were fitted out for the University of Music but the available space is nowhere near enough for the manifold requirements of such an institution so work was begun on an extension in 2009.

A campus for the University of Music in Karlsruhe, named "CampusOne - Schloss Gottesaue", equipped with a new teaching block along and a multimedia complex as well as a MusicMultimediaTheater (MUT) wing provides adequate space for the Karlsruhe University of Music's wide range of courses. The new concert hall, the Wolfgang-Rihm-Forum in the MUT, is a facility that has been created to extend and improve the diversity of the events segment.